The EOSBTC trading pair (EOS-USD) has shown some promise in the last weeks of 2019, after the price corrected from a short-term divergence to register some gains. This is after a prolonged period of range-trading that lasted from July 2019 till date, with the correction taking place from the lower end of this range.

BTC prices continue to remain stagnant in its pairing with the USD, which has allowed some of the altcoins to exhibit price movements based on whatever inherent fundamentals they possess. With this in mind, what is the outlook for EOSBTC going into 2020?

Block.one was forced by the US Securities and Exchange Commission (SEC) to pay a fine of $24million for its EOS ICO back in September 2019. However, this fine was considered by many as a slap on the wrist and in fact, the company actually “celebrated” the decision, considering that the ICO raised “several billion dollars” according to the SEC.

EOS also got a mention on a Chinese TV program that broadcasts in English. This program covers the gaming industry and its mention before a 1.5bn strong audience in a country which has been anti-cryptos was considered a huge plus for the token.

The technical analysis for EOSBTC starts from the daily chart. As at last week, a divergence situation was spotted on this chart, with the DeMarker indicator showing higher lows while the price was showing lower lows. This set up the EOSBTC pair for a recovery, which can be seen on the subsequent chart.

The chart below shows the correction of this divergence to the upside, with price contained within the ascending channel. Presently, price action is testing the channel’s trendline (i.e. lower border) at a price level of 0.0003614 (i.e. 36, 140 satoshis). This is also the price level at which previous highs were found between 21 and 23 August, 2019. Highs were also seen at this price level at various times after August 2019; most notably on October 3 and December 13.

We can also see from the daily chart below that the 20-period simple moving average (20SMA) line was broken to the upside during the price correction from the divergence. Therefore, the 20SMA line is expected to function as a dynamic support line.

At this time, the important technical price levels must be identified. To the upside, EOSBTC is expected to find resistance at 0.0003805 BTC (i.e. 38,050 satoshis), which is also where the channel’s return line (i.e. upper border) is located. It is also the site of previous September 9/24, Oct 25 and Dec 1, all in 2019. Various daily price candles also found previous highs or lows close to this price area, making it a pretty strong and valid resistance level. Above this price area, we also have another resistance at 0.0004042 (i.e. 40,420 satoshis), where a cluster of previous price highs were found between September 16-21 and November 11-18, 2019. 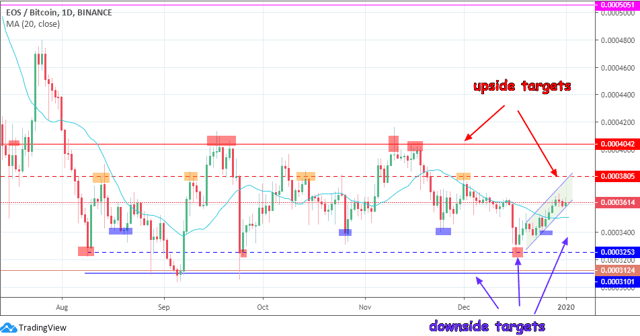 With these levels in mind, what is the present outlook for EOSBTC?

A look at the daily chart will show that EOSBTC has traded in a range from July 2019, and this range has the 0.0003101 BTC price level as the floor, with 0.0004042 BTC as the ceiling. However, other areas of support and resistance have operated within the context of this range, and this is also the context within which the active channel has formed following the bounce that signalled the correction of divergence.

Therefore, if price does not breach the channel’s trendline, we can expect a bounce from this level, which targets the next upside target at 0.0003803 BTC. Above this area, price will now test the upper barrier of the medium-term price range that has been identified, with potential to aim for pre-August 2019 highs at 0.0004751 or even the July 2019 lows at 0.0005051 BTC if the ceiling of this range is broken. We will need to see decisive price closes above each upside target by at least a 3% penetration before the resistance target above any level is targeted.

On the flip side, if we see a price break below the channel, this is a bearish signal which could send EOSBTC lower, targeting the 0.0003400 support area initially. Such a move would have to break the 20SMA line to become a reality. If bearish pressure is strong enough to allow EOSBTC to break below 0.0003400 BTC, this could line up a retest of 0.0003253 BTC, with potential for further downside towards the floor of the range at 0.0003101. These downside moves may occur within the context of a price recovery in BTCUSD, which is presently seeing resistance at $7300. Therefore, bears on the EOSBTC should watch for a price break of BTCUSD above 7,300, as this could be the trigger for further downside on EOSBTC.

The long-term trend as seen on the monthly chart continues to remain bearish as EOSBTC is still trading closer to its all-time lows. The range that has been formed since July 2019 renders the medium-term outlook as neutral. However, the ascending channel could allow EOSBTC to post some gains at least until price hits 0.0003805 BTC, which could allow for short-term bullishness on the pair.

We provide news, research, technical analysis and more at the Coin Agora on all things crypto!

Sign up now and get instant access to our 2019 Pick Portfolio—where three of our picks are up more than 80% since January!

Disclosure: I/we have no positions in any stocks mentioned, and no plans to initiate any positions within the next 72 hours. I wrote this article myself, and it expresses my own opinions. I am not receiving compensation for it (other than from Seeking Alpha). I have no business relationship with any company whose stock is mentioned in this article.

Why Centralized Exchanges Are Decentralizing

Are Attacks Between Rival Blockchains About to Rise?